Did you hear? We won!

We are excited to announce that we won 2 Telly Awards! We produced a video for the introduction of the Team USA at the Coupe du Monde de la Patisserie in France this year. This event is a very prestigious international competition, and we had the pleasure of working with the chefs that represented the USA in Lyon, France.

When Jeffrey Davidson the Director of Creative Marketing at Walt Disney World Swan and Dolphin Resort called us, he was looking for a production company that could develop a promo (introduction) video for the Pastry Team USA. The team including executive Pastry Chefs:

One of the competition’s requirements is to have an introduction video of up to 45 seconds were the chefs introduce themselves as well as the country they represent.

The Chefs were meeting here in Orlando at the Ritz Carlton Grande Lakes to practice for the competition and that was the perfect opportunity to film the video. 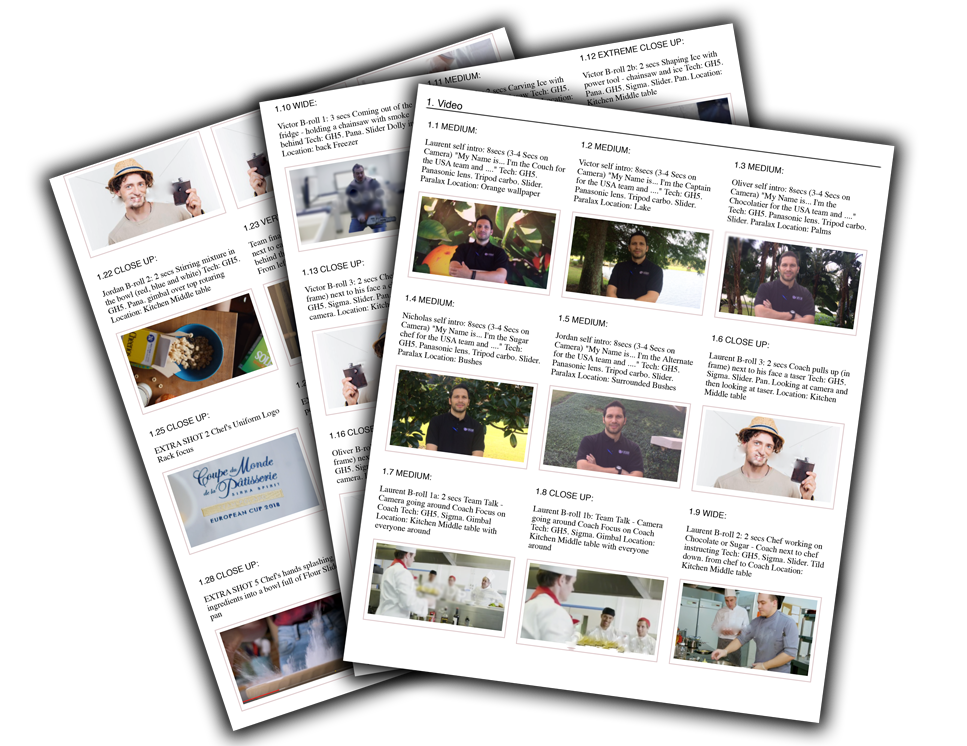 We visited the hotel a week prior to the filming day to scout the kitchen and possible areas where we could film some of the shots. After discussing with Jeff some of the shot options we had in mind, we decided to film most of the B-Roll clips in the Kitchen (which was smaller than we expected) and each of the Chefs would introduce themselves and say what their specialty was in the team. We created a Storyboard using photos we had taken at the hotel as well as other pictures that represented the other shots we had in mind.

Everyone liked the concept and we moved on to the production day in Orlando.

The shoot went as expected and we had a blast filming most of the shots, especially the one with the chainsaw!

The Chefs were great to work with and the energy on set was amazing.

They also wanted something funny in the video so we ended up creating a quick segment for each of them to do something with one of the kitchen utensils. In the end, the scenes came out great and the Chefs also had a good time filming it. 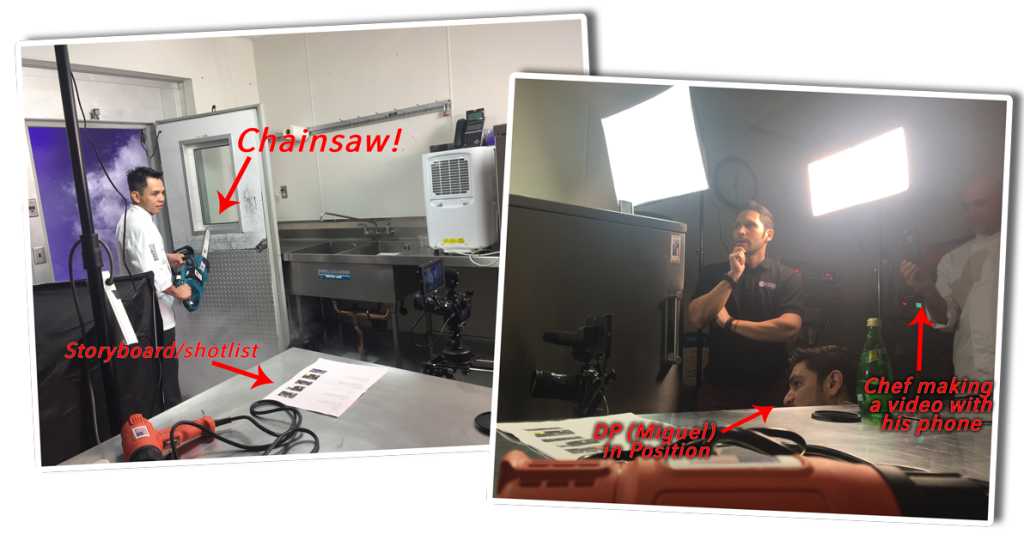 The Team did a great job In France, they got 4th place in the competition (although they really wanted to win 1st place) but all the teams were very strong this year.

This is the actual article where the 2 Gold award winners are featured in the top of the page. As you can see we were the only ones to win the award next to PBS. On the lower section, names such as Showtime, Cartoon Networks, VH1, Paramount Pictures were part of the competition in this category. 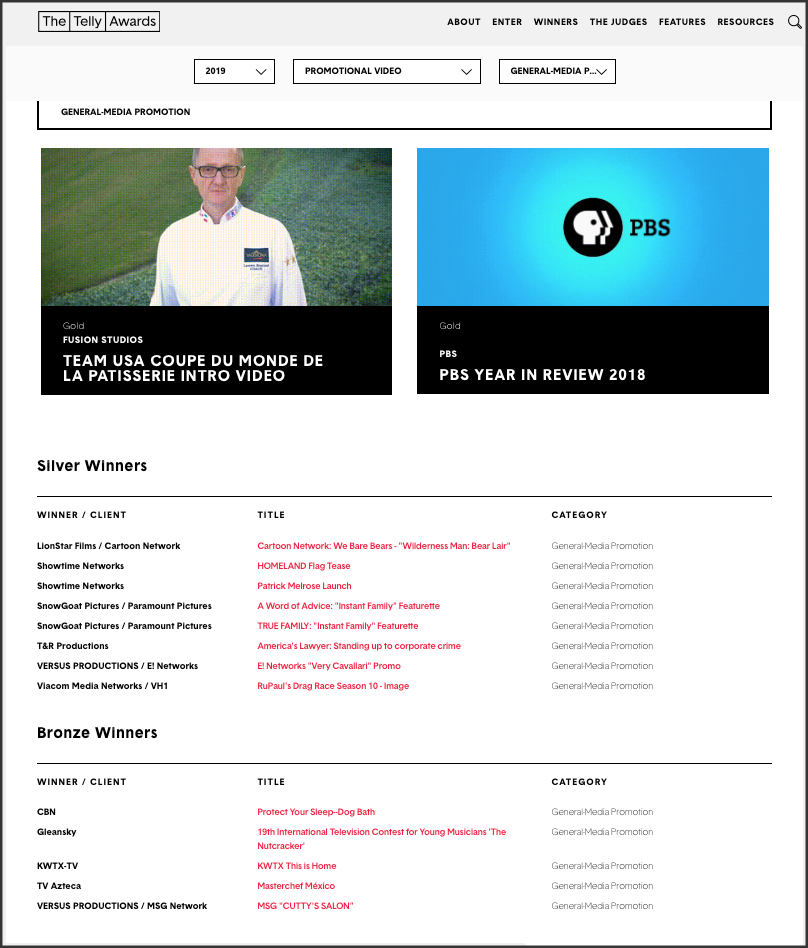 Check out all the winners HERE

We also participated in the editing category and we received the Siver award.

As we were planing the video, we thought having fast pace cuts throughout the B-Roll clips would help make the video active and dynamic. Of course, we only had 45 seconds and 5 chefs to feature, but we timed every single thing they would say in the video and created a script with lines that would fit perfectly in our time limit. We also added a really cool drums track (Courtesy of Karluca Music) with a fast pace and a good “crescendo” that helped the video move along with a hyped energetic swing. 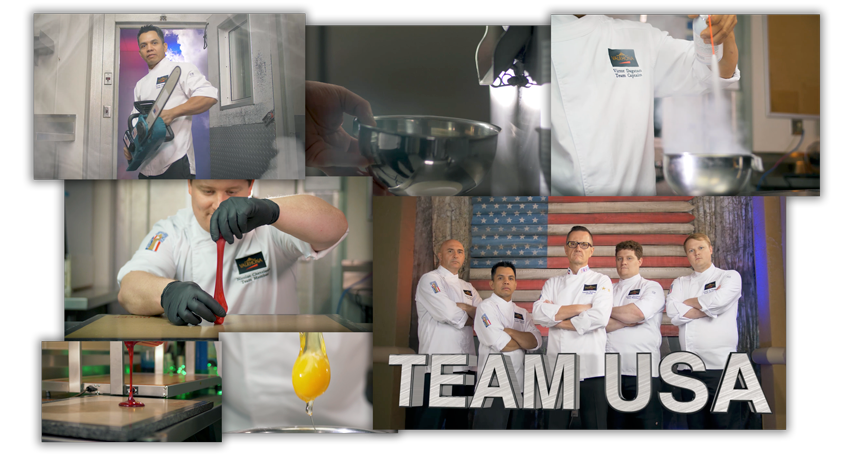 The final video had a lot of camera movements, quick food shots, dynamic sound design and interesting shots that made the video be impactful. A big thanks to the chefs for making an amazing job on camera, not everyone can handle being in front of the lens.

Check out all the winners for this category HERE